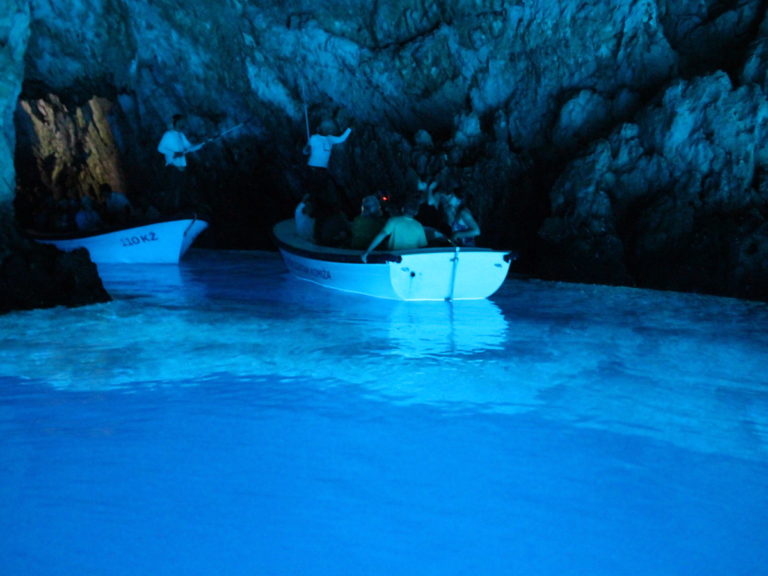 Traveling to Croatia sometime soon? Hey! Add the mystical Blue Cave Tour to your Croatia itinerary because if you don’t, you gonna regret it later. Read on to know everything about the Blue Cave in Croatia.

What Exactly the Blue Cave in Croatia is?

The Blue Cave or Blue Grotto or Modra špilja is a splendorous and unique geomorphological natural wonder on the Croatian Adriatic located in a bay of Balun on the island of Biševo, about 9 km (5 miles) from Komiža, Vis, and over 69 km (111 miles) from Split.

A hypnotizing silver-blue light illuminates the space inside the cave when the sunlight hits the surface of the ocean through a crack or vault (natural opening) on its arched roof and reflects off the seabed.

The intensity of the blue color varies with the season and time of the day. It’s best visited on a bright sunny day between 11 am and 12 pm as that’s when the sun is just at the right angle intensifying the entire experience.

Accessible only by diving through the natural opening (vault on the ceiling of the cave) until 1884 before it was discovered by Baron Eugen von Ransonet, the cave can now be visited on a small boat through a narrow artificial opening blasted out with dynamite.

Biševo Island, right in the center of the Dalmatian archipelago is only a few square miles in size. It’s composed of limestone rock and is the remotest and least populated inhabited Croatian Island with just about 15 residents.

There are no accommodation options on the island, hence the travelers only disembark here for a short while. Porat (Biševska Luka) and Salbunara bays on the island of Biševo have gorgeous sandy beaches if you want to swim and get tanned. But make sure you carry your beachwear.

The other attractions on the island are the Benedictine monastery ruins and the 11th-century well-preserved church of Saint Sylvester or Sveti Silvestar.

Medvidina spilja or Monk Seal Cave is another cave on Biševo Island in the Tresjavac bay.

How to Get to Blue Cave?

The Blue Cave can be easily visited on an organized tour from Split, Trogir, Vis, Hvar, Omis, Makarska, or other neighboring islands.

The Blue Cave Tours from Split or Trogir normally include a visit to other Croatian islands like Hvar, Budikovac, Paklinski, Vis, and Bisevo, and their attractions like Blue Cave, Monk Seal Cave, and others. There’s a genuine reason for it.

Bisevo is the remotest island on the Croatian Adriatic Coast and takes about 3 to 4 hours from Split or Trogir by speedboat. It’s way too far to go and way too much money to shell out (more than 100 Euros per person) just to spend 10 to 15 minutes inside the cave. Isn’t it?

Wouldn’t you want good value for money? So, that’s what tour operators do. They add beautiful stopovers to the itinerary to give you a good return for your Euros.

It usually takes around 1 hour and 30 minutes from Split or Trogir, an hour from Hvar, and 20 minutes from Komiža on Vis island to get to the Blue Cave.

We spent two beautiful lazy days on Vis island. This made it easy for us to visit the Blue Cave from Komiža.

Our Airbnb host called a local tour operator and arranged a speedboat tour to the Blue Cave.

Sailing to the Blue Cave

The journey to the Blue Cave itself is unforgettable.

Imagine this. A speedboat sailing through the ocean, wind in your hair, bluish blue as far as your eyes could see, the sound of ocean waves filling your senses, the touch of ocean waves healing you, and the taste of adventure spicing up your appetite.

The sailing is smooth more or less with rough phases in between. The channel between Biševo and Vis is known to be the most dangerous crossing as the west winds make the ocean recklessly rough. Thus, the tours operate only when the sea is calm and safe to sail.

You need to disembark at Mežuporat and board the little official boats (rubber raft) run by a company called Nautički centar Komiža.

No one else is allowed to take their boats inside the Blue cave. A maximum of 3 boats can enter the cave at a time. The remaining boats wait outside the cave for the ones inside to come out. They manage and run the official tours that last for just 5-15 minutes.

More often than not, a tour guide will buy you the ticket upon arrival on the island (included in the tour price). The Blue Cave ticket costs about 100 kunas (13.5 Euros) during July and August and around 70 kunas (9.5 Euros) for the rest of the year.

You might have to wait in a queue during the peak summer season. Don’t forget to carry sunglasses, a hat, sunscreen, and a scarf as the sun is harsh. The number system makes things easier though. There’s a ticket counter board that shows the next 12 ticket numbers in the order they need to board the boat to the Blue cave. The official boat holds 12 people at a time. Also, a staff standing near the waiting area guides everyone.

There’s an option to pay more price to get a fast-track ticket that allows you to skip the line.

It was a clear sunny day in June but luckily, we didn’t have to wait at all and could immediately board the official Blue Cave boat. By the time, we came back like after 15 minutes, the queue started building up so yes It can get crowded in the peak months of June, July, and August.

The cave attracts more than 100,000 tourists every summer and sometimes, during peak seasons visitors wait in a queue for 2 to 3 hours to spend just 5 minutes inside the cave.

Mežuporat has a café and decent washroom facilities. You can enjoy a coffee while you wait for your turn. In fact, you must try the local wine – Biševo Plavac when in Biševo.

Can you Swim Inside the Blue Cave in Croatia?

No. Be aware that swimming isn’t permitted in the cave. As I said, you can satisfy your desire to swim at the sandy beaches of Porat and Salbunara on Biševo island. You can also swim inside the Monk Seal Cave on Bisevo Island and Green Cave on Ravnik Island.

There is an umpteen number of tour companies operating day tours to the Blue Cave. Before you book a tour with a tour company, make sure to do your research, compare prices, check the itinerary (what all islands and attractions are covered), and most importantly, read customer reviews before making a booking.

Here are some of our recommendations based on customer reviews and fellow travelers’ experiences:

Know Before You Go

The Blue Cave is as magical as it can be. Now you ask, is it worth waiting for an hour in a queue just to spend 5 minutes inside a cave? I say, yes. Totally. Arduous journey but a rewarding one.

It’s nature putting up an incredible show just for you. Mother Nature is pretty freakin’ awesome! How amazing it is to know that magic exists in everything happening around us. It’s real.

While inside the blue cave, look around, look deep into the water, breathe and take it all in. Believe me, the experience is other-worldly that leaves you gasping. Mini-me thought it was incredible.

We sincerely hope our guide to the Blue Cave in Croatia helps you plan a perfect visit. If you have any questions, let us know in the comments section below. We’ll be happy to help as always. And if this post helped you in any way, can I ask you to please share it with the world?

A story-weaver and a travel blogger based in Delhi, Anjali left her corporate job to see what having life exactly feels like and never looked back. Her 14-year-old daughter is her best travel buddy. She aspires to travel to all the seven continents with her family. Antarctica remains her dream destination. Books, mountains, colorful doors and windows, blue skies, sunsets, open roads, cobbled streets, undiscovered places, and beautiful minds inspire her. Join her as she unclothes the beauty around the world, one place at a time.

We are so happy you're here!

Make yourself at home. Let's get acquainted. Travel Melodies brings you the beautiful stories of family adventures that inspire you to travel more, and travel better with kids for kids, thoughtfully curated by two moms, Anjali and Neha who love to see the world through their children's eyes. Read More

Sign up to receive intriguing travel stories, behind-the-scenes updates, and exclusive travel advice straight to your inbox. No Spam. Promise.